Sokan-Ryu: The Kobudo of Busen Arakawa

Sokan-Ryu is a little known style of kobudo founded by Busen Arakawa in mainland Japan. Arakawa sensei was a senior student of Kanki Izumikawa at the Senbukan dojo and later also learned Ryukyu  kobudo from Shinken Taira. In 1960 Arakawa was awarded with a shihan license in Ryukyu kobudo from Taira. In 1966 he received 7th dan from Kanki Izumikawa.  Since there is virtually nothing written on Arakawa or Sokan-Ryu in English I wanted to share some of what I have been able to learn.

Sokan Ryu has both Japanese and Ryukyu elements. In the late 40s Busen Arakawa was told about the nunchaku on Okinawa by Kanki Izumikawa. This led Arakawa to devise his own version of it based on the descriptions he was given. The Japanese version of it came to be known as sosetsukon and had several differences from the Okinawan version. The sosetsukon was longer and also had a shorter cord. Arakawa had also developed several unique techniques with it not practiced on Okinawa.

In 1951 it was shown to the public in Japan for the first time. At the request of Kanki Izumikawa, Arakawa gave a demonstration of his sosetsukon techniques. Afterwards he was approached by numerous people who wanted to learn from him. It's thought Sokan Ryu was the first school outside Okinawa to popularise the techniques of the nunchaku. In 1955 Arakawa founded his own dojo in Suginami Tokyo as a branch of Izumikawa's Senbukan. In 1965 he renamed his dojo to Rinbukan. Arakawa taught both Sokan-Ryu and Izumikawa's Goju-Ryu together.

While Arakawa sensei's kobudo started out only with nunchaku, Sokan Ryu encompasses a full kobudo curriculum including bo, sai and tonfa. Izumikawa was also a noted expert of kobudo and must have had a great influence on Arakawa. One of the kata preserved in Sokan Ryu is Izumikawa no Sai, which is presumed to have been taught by Kanki Izumikawa. In Shinken Taira's encyclopedia of Ryukyu Kobudo Izumikawa was listed as an advisor, and Busen Arakawa was listed as a member of the board of directors and Shihan.

Over the years Arakawa earned the nicknames "first nunchaku master in Japan" as well as "god of nunchaku". He was so well known for his skills in Kobudo practitioners of other karate schools came to him for instruction. This includes some members from the Shudokan founded by Kanken Toyama and people from Gensei Ryu as well.

During his life time Arakawa sensei continued to research and refine the techniques of  Kobudo. The only two students he authorised to open official branch dojo were Sosen Nanao (Hokushikan) and Soushun Kobayashi (Koshinkan). Today Kobayashi sensei is the head of Arakawa sensei's Rinbukai.

Dojo From the Izumikawa Lineage

In my last article I went over some of the major dojo from the lineage of Seiko Higa sensei. Today I wanted to write a bit more about the Kanki Izumikawa lineage which I practice. Compared to Seiko Higa there is even less information on Kanki Izumikawa and his students. Here, I will go over some of the major groups that branched off from the Senbukan.

The Rinbukan dojo was founded in 1955 as the Suginami branch dojo of the Senbukan. In 1965 it was officially renamed to "Rinbukan" by Busen Arakawa. Busen Arakawa was one of the most senior student of Kanki Izumikawa. He was awarded 7th dan by Kanki Izumikawa in 1966, the only student to receive the rank. He also held a shihan license in Ryukyu Kobudo from Shinken Taira. Arakawa sensei was a strict and disciplined man, who placed a high emphasis on ethics and morals. He earned the nicknames "god of nunchaku" and "first nunchaku master in Japan" for his legendary skills. Arakawa sensei's two most senior students were Sosen Nanao and Soushun Kobayashi.

The Sosuikan dojo was founded by Sosui Ichikawa. Originally it was the Taito branch dojo of the Senbukan. Sosui Ichikawa was one of the earliest senior students to join the Senbukan after the war. In 1950 he received his dojo license from Kanki Izumikawa and opened his dojo in 1952. Eventually he would receive 6th dan from Kanki Izumikawa. Ichikawa sensei also trained Judo and Daito Ryu Aiki Jutsu in addition to Goju-Ryu. He was well known for his skills in kumite and applying the kata techniques. He placed a great emphasis on the study of the bubishi and eventually wrote his own manual the koshudo. Overall Ichikawa sensei produced the largest number students from Izumikawa's line who went on to open dojo of their own such as the Gobukan, Tanshinkan, Kenshinkan, Goju Kensha, Seibukan, Shigakukan, Goshikan, Jinbukan and others.

The Hawaii Senbukan was the only branch dojo founded by a student of Kanki Izumikawa that did not go independent after his death. The dojo was founded by Kenneth Murakami who was from Hawaii. After the war he was stationed in Japan and was able to train at the Senbukan dojo with Kanki Izumikawa during the 50s. Before Murakami left for Hawaii Izumikawa asked him to open a dojo when he returned home and teach his karate. Kanki Izumikawa came to the Hawaii branch dojo both in 1961 and 1964 to teach the students there. During the 1964 trip, he took Busen Arakawa and Ryoichi Yanase with him. The dojo was later taken over by Tomu Arakawa after Murakami retired. Today it is run by Alan Lee and they still continue to teach the "old ways" of Kanki Izumikawa.

Seishin Juku was founded in 1965 in Arakawa, Tokyo. Hyotaro Harada was a top senior student of Izumikawa who stepped in as Senbukan director after his death. Several of his students opened dojo in Tokyo such as Isamu Terada and Yuichi Yaguchi. Harada was later awarded 8th dan by the Zen Nihon Karate Do Renmei. In 1995 the dojo was relocated to it's present location in Adachi Tokyo. 3 years later Hyotaro Harada died of a stroke at the age of 63.

Satoru Suzuki was born in 1933. He began training martial arts at a young age. He learned Goju-Ryu karate from Kanki Izumikawa at the Senbukan dojo. At the same time, he also studied the techniques of Ryukyu Kobudo. He would eventually open his own dojo, simply known as the "Suzuki Dojo". He appeared in the famous movie “budo the art of killing” where he demonstrated nunchaku techniques. He was also recognized as 8th dan Kiyoshi by the Zen Nihon Karate Do Renmei. Currently he is the last senior living student of Kanki Izumikawa.

Kazunari Sekishiro was a senior student of Kanki Izumikawa from the earliest days. He can be seen in a number of photos with Kanki Izumikawa and other Senbukan students. According to Katsuya Izumikawa he was one of few students to have trained with his father for over ten years. At the memorial for Kanki Izumikawa he performed Kururunfa kata in honor of his teacher. He formed the Seishinkai and began to pass on Izumikawa's Goju. The organization is run by his two sons today.

Gobukan --> Kenjiro Chiba
Kenjiro Chiba began his training with Kanki Izumikawa at the Senbukan dojo. In 1962 he opened the Gobukan in Sendai City. He also went on to join the Sosuikan dojo of Sosui Ichikawa. Chiba would eventually receive Hanshi Judan from Sosui Ichikawa. As a result of his training with Izumikawa the Gobukan has retained some of the older methods of Kanki Izumikawa in addition to Ichikawa's teachings.  There are a number of branch dojo of the Gobukan in and around Sendai. The dojo is run by his son Kojiro Chiba today.

Yuzenkai --> Yoshiaki Naganuma
Yoshiaki Naganuma first began his training in the early 60s at the Senbukan with Kanki Izumikawa. After he passed away in 1967, Naganuma continued training with the successor to Kanki Izumikawa (his oldest son) Kanbun Izumikawa. Following the death of Kanbun in 1982, Naganuma established the Yuzenkai in Atsugi City. In 2013 the organization was passed on to Kazunori Omoto, his most senior student. Today it is one of the larger groups from Kanki Izumikawa's lineage. Omoto sensei is a high school vice principle in his professional life.
at January 13, 2021 No comments: 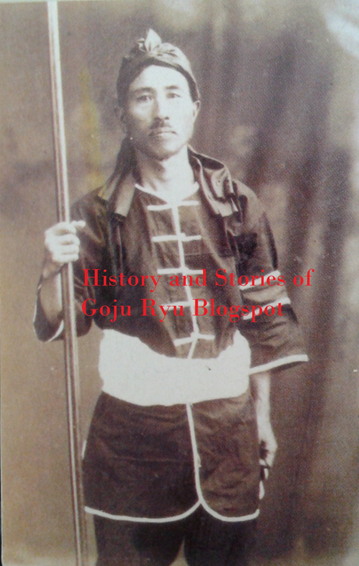